From meeting Villanelle’s family to navigating the intricacies of being a double (or triple) agent, Season 3 has given us a deeper look into Killing Eve’s complicated characters. At the helm this season was lead writer Suzanne Heathcote, a playwright and ex-actor who’s no stranger to complex character studies. We spoke to Heathcote about the totality of Season 3, and how the emotional events of this season will impact our characters as we move forward.

Q: What's so interesting about this season is how so many of our characters are touched by the themes of motherhood, family, home, and roots. Why were these themes so important for you to explore?

A: I'm a playwright by trade, so I think those themes are always quite inherent in my work, if I'm really being honest. What I’ve written for theater throughout the years has touched on those kinds of character relationships. I'm always interested in the relationships that you don't choose — the ones that are forced upon you.

I also think that in terms of storytelling, by Season 3 the audience has earned a deeper look at who these people are. To really know who someone is, you have to understand a little more about where they came from. I didn’t consciously think "Oh, I want us to look into everyone's family situation," but these things just came up in the writers room as we were talking about each of the characters and who they are.

There’s something about exploring the closest relationships in their lives that brings us deeper into them. So much has happened to all of them in the two seasons prior in a very short period of time, so they've all changed from the people we were first introduced to at the beginning of Season 1. They've all been altered in some way, and so it's really about understanding how that affects their lives on a deeper level.

Q: This season, the actors were really given a lot of space to explore their characters. Obviously this is an influence of your work as a playwright, but how do you feel like your theater background has helped carve out that space for the actors?

A: I think when you work in the theater, you tend to start with character. That's where the stories tend to begin, since you don't have the same visual storytelling that you do on screen. It’s the characters taking you through this journey, as opposed to the visual elements that you have with TV and film.

Before I was a playwright, I was an actor, so I do tend to have the character lead the story as opposed to the other way around. People are the most interesting thing to me — I find them the most fascinating source of inspiration. And this group of people in particular are so interesting, so complex, flawed and multifaceted, that by Season 3 there’s such rich soil to work with as a writer. It was a real joy diving into that stuff.

Q: Food has been a through line since Killing Eve's beginning, and it’s so fun to see how it represents something different for each character. For Villanelle, it seems that food is something she indulges in for fun and usually out of boredom. For Eve, food and cooking in particular serve a far more cathartic purpose. How do you see food’s role in the show?

A: Yeah, it's so interesting! Villanelle loves to eat, and it's such a natural pleasure for her. She never tires of it, and I think there's something very appealing about watching someone really enjoying their food. You're right, I think with Eve it's more practical, and it says something about them.

For Eve this season I think it speaks to what she’s going through emotionally. It’s almost as if subconsciously she doesn't feel she deserves to derive pleasure from it. Villanelle, on the other hand, believes she deserves every pleasure. This really speaks to their different views on life — I think food represents those views very clearly.

Q: Let's talk a little bit about the introduction of Villanelle's family this season. How did you go about crafting their dynamic?

A: For me, it was coming up with her backstory and where she'd come from. Even though a lot isn't explicitly said and a lot of details are left out, in my mind it was a very clear journey. I was really interested in the relationship she has with her mother. What I was really interested in exploring was the mother's perspective. This idea that Villanelle had been “born bad,” and yet the reality being that Villanelle's mother herself is someone who has a facade, a veneer that's incredibly convincing. Villanelle, and to an extent her half-brother, can really see beneath it, and very few people can see beneath it. Was Villanelle actually violent as a child, and did she always show tendencies that were genuinely terrifying to the family? I was really interested in those questions and the reality that there's no definite answer for any of them really, but that there's truth in each element. I did feel like the relationship with her mother was so key.

The psychologist who we talked to for the show worked in prisons and has dealt with psychopaths, and he said a lot of psychopaths have allegiances to their mothers. "I'll do anything to protect my mum," or "If anyone touches my mum, I'll kill them." He said everyone wants to be loved by their mother, whether you're a psychopath or not. That was such an ‘a-ha’ moment for me because I thought yeah, it doesn't matter that she has violent tendencies. Feeling rejected by your parent is still a very difficult thing to grapple with. You still want to feel that connection, that love from that parent. That doesn't go away.

Q: This is the first season in which Eve and Villanelle don't seem to be actively attempting to kill each other. There seems to be a bit more nuance there. Where do you see their relationship going from here?

A: I can certainly relate to their relationship, and I assume a lot of people can. It’s a relationship that you know isn't good for you, but at the same time, you can’t avoid it. It's a dangerous addiction for both of them. Everyone assumes that Eve is the only one in danger, but Villanelle's been physically damaged by this relationship, too. For me, the reality of their relationship is that they have an understanding of each other that no one else has. I think that in itself is so addictive, and by the end, they can't fight that any longer.

The reality is they know that they're in this together to the end. And in Season 4, who knows? That ending is saying we can pretend we're going to run away from each other, but we both know that's simply an impossibility at this point. They're too intertwined. So it may seem like a small moment, when they both turn to each other on the bridge, but in actuality it’s huge. It’s them acknowledging that. 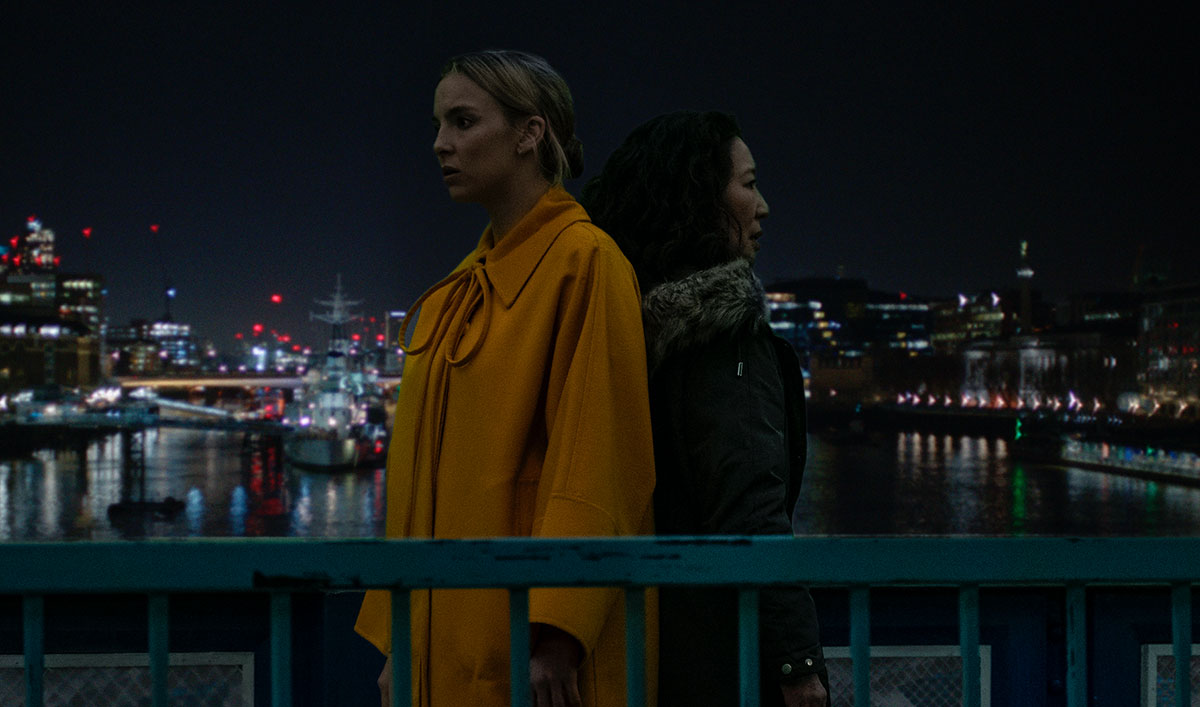 Q: The climax of the season finale is surely Carolyn and Konstantin's scene. Why does Carolyn shoot Paul instead of Konstantin? Does she actually believe him and is he actually telling the truth?

A: It's so complex for Carolyn, and I think it's one of those decisions where she’s damned if she does and damned if she doesn't. I think if she killed Konstantin in that moment, she would never fully be able to forgive herself for it. And yet not killing him creates a different regret, but it's a regret nonetheless.

We talked a lot about Konstantin potentially being Kenny's father and if there’s truth in that. I think it’s really about that seed of doubt in her at that moment—it’s just enough to pull her back. But I think that will be a burden she has to carry going forward. Paul is, as far as Carolyn's concerned, traitorous one hundred percent. Her vengeance gets taken out on Paul because he represents The Twelve in that moment. Ultimately, she believes she was the one who led Kenny into that danger. She was a competent boss, but maybe not a competent mother. I think that reality hits her and she knows that killing him will not provide her with the peace that she needs. I think she’ll grapple with it for the rest of time. 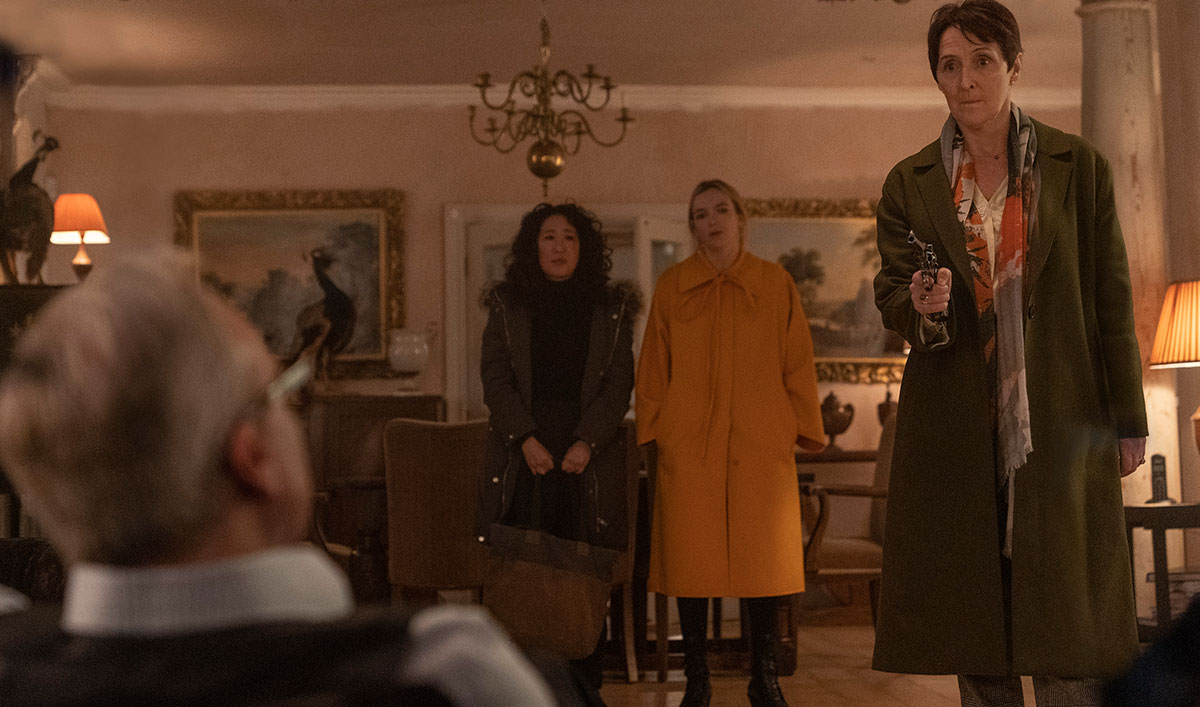