Ian Kahn, who plays George Washington on AMC’s TURN: Washington’s Spies, talks about how he prepared for his role and what surprised him most about Washington.

Q: How did you prepare to play such an iconic figure in American history?

A: I could be no more grateful or humbled to play General George Washington. I spent three hours a day on the phone with Daniel Shippey of the Breeds Hill Institute from the moment I got the job until we finished shooting. He supplied me with letters from Washington, articles about Washington, and as much information as a man could possibly want. I cannot overstate the value that Dan had to my work on General Washington.

Q: As you were researching Washington, what surprised you most?

A: What surprised me most was how he is honored and admired not just for being the proverbial father of our country, but for being one of the greatest men in the history of this country. He thought of others ahead of himself. He practiced life with humility. He didn’t consider himself the smartest man in the room, but he may have been the wisest. I certainly didn’t know as much about Washington beforehand as I do now, but he’s become a true hero to me and a great role model of how to live a higher-purposed life.

Q: How have you come to see George Washington as a spymaster and military leader?

A: What’s most interesting to me about General Washington is the idea that he could never tell a lie. He was a true spymaster. He was also a great general, not necessarily in winning wars, but in the way that he extended the American Revolution so that the British grew tired of the cost and loss of war.

Q: What was the hardest part about playing George Washington?

A: The most challenging part of playing Washington is living up to the greatness of the man. He lived in a higher level of consciousness than most people do walking through the world. I’m surely not as great a man as General Washington, but when I step into those boots, I aspire to capture a piece of his great spirit and let it shine for the audience. 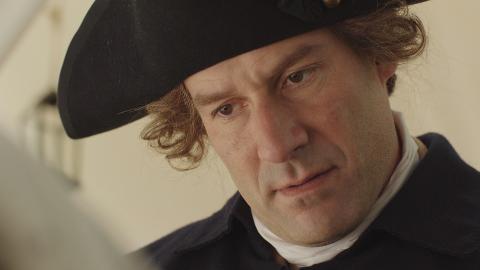 Q: Do you feel like TURN: Washington’s Spies is helping Americans to learn more about the American Revolution?

A: I hope that the show is helping people to understand more about the American Revolution, and to give credit to the great men and women who helped forge this country. TURN is a great gift, and I hope that viewers are enjoying watching it as much as we enjoyed doing it.

Q: Have you ever been to Mount Vernon?

A: I desperately wanted to go to Mount Vernon when we were shooting in Richmond, but I was so busy with prepping to play the role that I didn’t have time to make the trip. I can’t wait to go to Mount Vernon. I’m only wondering if I can sleep on the grounds to really get into the feeling of what it was like to be General Washington.

Read an interview with Heather Lind, who plays Anna Strong >>