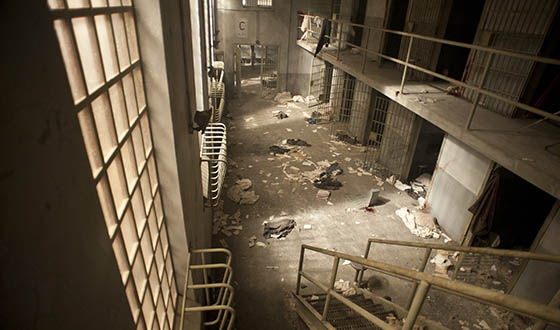 The Walking Dead’s production designer Grace Walker talks about cleaning up the prison for Season 4 and the secret to making it look like the world has ended.

Q: What projects have you been working on for the new season?

A: We’re trying to form better conditions for the survivors at the prison. We figured because we had a lot more people coming in — like the people coming from Woodbury — that the cellblocks were starting to overflow, so we made more room for them. We had to have better shelter, and conditions where they can now eat outside.

Q: Last season, which episodes were more difficult for you: those that took place at Woodbury or the prison?

A: I think we learned a lot with the Woodbury stuff. We only used to have, like, three hours to get it set up. We’d get in there early in the morning and put up our big barriers and the walls and get everything all ready in the main street area. We’d go like crazy and then we’d shoot for a day, and then we’d have to pull it all down again. And if we went back the next day, we’d have to do it all over again. The exteriors were kind of easy, and we were fortunate enough to have a couple buildings within the town where we’d build out a set, as well.

Q: What are some tricks you’ve learned on the show that have made set construction easier?

A: With the prison, the interiors have worked really well, as we go into them time and time again. We’ve got it down now where we can remove walls from the cells a lot faster than when we did the first episode there. The main block has 18 cells; nine below and nine above. And we can shoot in any of those cells and take out all the walls, including the rear walls on the second floor as well. We’ve got mobile towers that we quickly put in. We’re just completing a new cellblock for this season, and it’s looking almost better than the others. But like everything, we’re not quite ready — there’s always a moment when we’re nervous and trying to get things done. But we always do, and it looks great!

Q: Are there any sets you dreamed up that never ended up getting built?

A: There was a very big shower set that we were going to build for the prison. And that never came off. But that doesn’t happen that often; because of the time we have, we don’t have time to shift things around.

Q: The band of survivors on the show has learned to be very resourceful in the aftermath of the apocalypse; has any of that rubbed off on the crew?

A: What we do a lot is take sets we have and then use them someplace else. The cafeteria that we used last year we then turned into the prison laundry. And then it was turned into the prison generator room. We basically used the same vantage, but changed it around a bit with different colors and different dressings, and voila. We have a new set this year that you’d never know was the old one.

VIDEO: Gearing Up for Season 4: Inside The Walking Dead

Q: What’s the secret for making something look post-apocalyptic?

A: Something that’s got a good age and is getting older. Things getting overgrown, weeds are growing, vines are crawling on things; the paint is fading, cracking, peeling off. The concrete’s falling away. It’s a challenge, but we work with great painters.