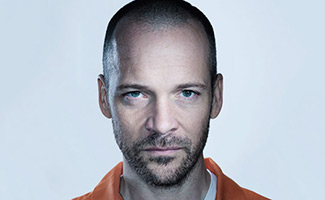 Peter Sarsgaard, who plays Ray Seward on AMC’s The Killing, talks about getting into the mind of his character and what drew him to the series.

Q: The question of whether Ray Seward is innocent lingers over the show. Did you wonder about that yourself?

A: That doesn’t really matter, because he’s a person that is filled with a lot of self-loathing. I knew from [Executive Producer] Veena [Sud] whether he was literally guilty or innocent of the crime for which he was in jail, and that this is a guy that in some ways does not believe he deserves to live.

Q: Ray Seward is soft-spoken but tormented, angry but calm. What is the secret to playing a character who’s strongest emotions are largely internal?

A: People think that you have to actually imagine yourself killing someone or pulling someone’s eyeball out to play some of these characters. Well, you can have wanted to pull someone’s eyeball out. I’ve only been in one fight in my life, and the guy was much larger than me — I was furious at him because he had made fun of an epileptic friend of mine who was having a seizure. The amount of hate that I felt for him is like the amount that you need to play Ray Seward. If you’ve ever felt jealousy, envy, anger, hate, sadness, and self-loathing, maybe you could play Ray Seward.

Q: Did you and Veena have any back-and-forth discussions about the specific vision you each had for the character?

A: The only thing we had any discussion about was what I looked like. When I came in, I had really long hair and a huge beard, and I said, “You know, I think he could look like this.” But she really wanted to see my face. She knew this was a character that was potentially inaccessible, and she wanted people to really be able to access him. So she convinced me to cut my hair, and I was like, “If we’re talking about seeing me, how about we shave my head?” And then I had a big beard and a shaved head, and I looked a little bit like Hugh Jackman in Les Miserables. We actually kept it that way for a little bit. We sculpted the beard so I almost looked like a biker, and we did a mugshot, which is in the show. Then we shaved the beard, and we really never looked back.

Q: The scene in the Season 3 Premiere in which Seward attacks the prison chaplain stuck in a lot of people’s minds. What was your reaction when you first read the scene?

A: I was like, “He did, what? The chaplain?” Then I thought, well, maybe they’re going to cast someone who’s an asshole. But this [actor] was a beautiful man. He had been on the Canadian track team as a miler, and as a fellow runner, I totally identified with him. But when I read that scene, I was like, well, I guess I hurt him, but I must just bonk his head on the bar, now no one is going to mess with me in prison. But then, when the stunt guys did the scene, they were splashing blood and I was like, “Wow, this is really violent.”

VIDEO: Ray Seward discusses his crimes with the prison chaplain

Q: You’ve said before that you don’t believe in the death penalty. How did this role affect that perspective?

A: It was one of the things that drew me to playing the role. I didn’t want to play someone who was either saying “I’m not guilty” or constantly saying “I’m so sorry” and begging for forgiveness, because I sort of thought that neither one has to do with the death penalty. I don’t care if someone is guilty as sin, I don’t care if they’re apologetic, I still don’t want them executed. And I liked that I would have an opportunity to play a scenario that made it more difficult for people.

Q: Were you wary of accepting such a dark role when you first heard about it?

A: The great thing about playing these characters is I get to have these feelings that are not acceptable to show in life, for one reason or another. And most of the time when I come off the set, I’m in a fantastic mood. It’s a classic therapy thing. I think it’s incredibly healthy.