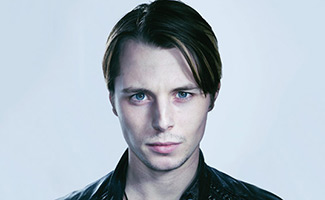 Max Fowler, who plays Twitch on AMC’s The Killing, talks about mastering an American accent and dusting off his skateboard for his character.

Q: Did you spend any time with actual street kids to get into the mindset for Twitch?

A: No, but that would have been amazing. I live in London so… I did a little research into that world and obviously they based a lot of it on the documentary Streetwise. So there are things to go on, which helped understand what these kids go through, what their lives are like.

Q. Was it hard to master an American accent?

A: Growing up in London, we’re so exposed to Hollywood and American cinema. Ninety percent of the movies I watched were American, so we’re already exposed to the accent. It was definitely something that came quite naturally. I think the biggest thing was getting into more of the street talk, the kind of sharper, street rhythm. To practice, I stayed in the accent for a long time when I got out here. It started as a set thing, and then I spent a bit of time on my own. I didn’t have family or friends or my girlfriend out here yet, so I was like, you know what, why not? If I can get it to the point where I’m so comfortable talking to people, then I’ll know it’s really strong.

Q: Are there experiences from your own life that you drew on to play Twitch?

A: The only thing that I can relate to is that driving for that dream, the wanting to become an actor, which is what I did for years. But besides that, his whole life has been completely different than mine. I had a very fairy tale childhood. I have a wonderful family and an incredible amount of friends and wonderful support, whereas Twitch is kind of the opposite. He’s never had anybody, and he’s been on his own on the streets.

Q: If you were to give Twitch advice about an acting career, what would you say?

A: The best thing you can do is be as prepared as possible. Be on time. Always know your lines. Be nice and be friendly. And just work hard. I feel like for a lot of people going into acting, there’s a lot they don’t realize about how much time you have to put into it. The people at the top are at the top obviously because they’re very talented, but also because they work their asses off. I think Twitch’s mind is in the right place, but I think maybe too much is resting on his ego.

Q: The Killing is your first foray into American television. How does it compare with British TV?

A: On my first day filming on The Killing, it was so exciting. Just hearing the accents, it was like, “Wow.” But when it comes down to it, it’s pretty much the same. One thing is different though: As a whole, Canadian people and American people that I’ve met tend to be a bit more positive and upbeat than British people. That’s really the only difference.

Q: You’re 22. What’s the best part of working on a set with a lot of other young actors?

A: I’m 22 years old and I’m playing a 17-year-old. The other actors are really young — Julia is in her teens and Bex is 18. They’re only a few years younger than me, but a lot happens in those few years. From 18 to 22, I’ve grown up a hell of a lot. And it’s nice getting to work with young actors in a scene, because it helps you get into that young mindset when you’re hanging out with them. As an actor, you always can learn from anyone, even if they’re younger.

Q:Were Twitch’s moments on a skateboard performed by you or a stuntman?

A: I used to skate all the time when I was young. I’m talking about when I was around 14, so nearly ten years ago. The muscle memory was still there in terms of being able to move on the board and skate around, but as soon as it came to doing some tricks, the fear kicked in. I was thinking, “I could land on my face really easily right now.” But I didn’t have to do anything too taxing, and that was all me, I’m proud to say.

Read an interview with Bex Taylor-Klaus, who plays another one of the street kids, Bullet