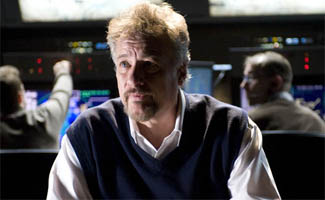 The actor known for his role as Q on Star Trek discusses a father’s worst nightmare, the nature of panic and how his Breaking Bad role has changed his perception of airplane travel in AMCtv.com’s exclusive interview.

Q: What made you want to be in Breaking Bad?

A: [Casting director] Sharon Bialy had told me, “If you get this, you’ll get an opportunity to do things you don’t usually get to do.” And she was right. I usually play the sort of hard-boiled guy who is forcing situations — I’m not usually playing the person in reaction.

Q: Donald goes through a father’s worst nightmare. As a father yourself, what was that like to portray?

A: As you can well imagine, it was sort of terrifying. I guess the difference is, instead of your children dying quickly from some terrible accident or a murder or something of that nature, you’re watching your child die slowly, and it’s just excruciating. In my storyline, we don’t talk about her mother or anything, so perhaps her mother had passed away, which is the way I think about it. So when I say it’s been 18 months, you can imagine I’ve been going with her to these meetings for 18 months. I’m as invested as one could ever hope to be invested.

Q: Did you sit in on any Narcotics Anonymous meetings?

A: Well, yes, I did. It’s a little excruciating, and everybody is trying to deal — I don’t think there’s anybody, at least at the meetings that I was in, who wanted to be there. But they were all trying to do the right thing.

Q: You mentioned you play a lot of bad guys. Here, you’re still an antagonist even though you’re a genuinely good guy. Is that a strange situation?

A: I think I’m one of the first real innocent victims of what our hero is doing. And we don’t even know each other. I think I’ve become an antagonist because of my victim-hood. I could represent the other side of the coin to our hero, and therefore be an antagonist to him.

Q: Donald suffers an internal meltdown that leads to this climactic plane crash. What’s the closest you’ve ever come to that level of panic?

A: I had a panic attack years ago in preparation for a very difficult show. And you cannot hear, or see, or you can’t compute. It’s quite terrifying. You’re just not making sense of anything. I sail to Hawaii and back a lot, and it sometimes involves very terrifying experiences. And you have to keep yourself from becoming panicky. They’ve done a lot of tests about panic — it’s where you don’t see any solutions. All you might have to do is open the door and walk out of the room because there’s a fire. But you cannot see it. You can’t get there from where you are. That’s what I felt was being shown for Donald there, where he’s just lost in those numbers. He’s not connected any more.

Q: Did you have to learn the Air Traffic Controller’s code?

A: I got a crash course [laughs], and I have to say that crash course came pretty late in the process. And they are in fact just numbers, and they talk so quickly in real life that I’m surprised there aren’t more accidents. It is so fast, and that’s exactly the way they talk.

Q: Did that thought occur to you the next time you had to fly?

A: [Laughs] Well, let’s just say I was a more informed flyer, and that might have made me a bit more nervous, yeah.

A: No, it hasn’t changed my flying habits.